Tynedale North of the Wall Archaeology Group consists of volunteers actively engaging in the archaeology of their local area.

Our aim is to correct the imbalance that has reduced over 4,000 years of human activity to just 300 years of Roman occupation, by exploring and recording the archaeology of our local landscape and publicising the full story of the area's history.

Since 2013 our group has been conducting and reporting on a number of archaeological surveys at locations a few miles north of Hadrian's Wall. In April 2016 we secured support from the Heritage Lottery Fund and Northumberland National Park Authority for a 12 month project training and engaging local volunteers in archaeological fieldwork surveys and desk research into the history of human activity in an area north of Cawfields Gap. Over the coming months this blog will be focusing on the activities of volunteers involved in the project and the archaeology we discover. If this grabs your interest and you would like to join in please email us.

We were immensely pleased that our first training workshop  was led by Tim Gates. During the late 1990’s and early 2000’s Tim carried out an aerial survey along parts of the Hadrian’s Wall Corridor which revealed hundreds of previously unrecorded archaeological sites within just a few miles of the heavily surveyed Roman Wall. The report that Tim produced for Northumberland National Park has been the inspiration, guide and primary source of information for our work since founder members began surveying the local area in 2012, prior to the formation of the community group a year later. The quality of Tim’s work has long been very highly by professional archaeologists and community volunteers alike. 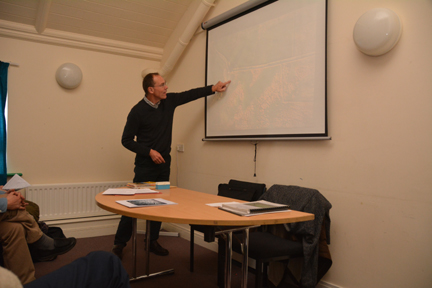 Tim gave an initial presentation of images from his aerial survey illustrating the types of site often to be found in the landscape in the vicinity of the Roman Wall. Astonishingly some major sites had previously remained unnoticed despite being within a few hundred metres of well-researched Roman sites.The main purpose of the workshop was to provide volunteers with the opportunity to study aerial photos of the area with guidance from Tim. Participants worked together in small groups before reporting back on what they had discovered on their aerial photos. 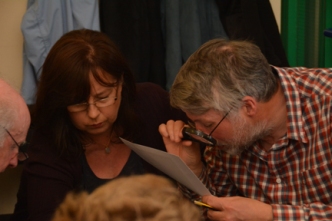 View all posts by beyondthewallnews